Today was the first of a series of “formgivning”lessons, that is design and form, at knitting school.

I have a hardback A4 art block which will be a diary of the academic year ahead. We have already been encouraged to try to fill our respective diaries with designs, ideas and reflections as we think of them both inside and outside the classroom and in a variety of styles such as sketching and collage.

The first page in my brand new art and design diary shows my attempt at a self-portrait using collage:

My hair is based mostly on a postcard that I bought at Jamtli, a museum in Jämtland in Northern Sweden. The card had two rows of traditional Swedish embroidered cushions before I chopped these images into waves for my thick hair. The red and white pieces are from a small cardboard box intended as a napkin holder originally. My rosy lips are quite floral cut from a magazine and my scarf is made from a paper napkin.

My nose and the clothes I am wearing come from a cut Valentine’s card from my dear Swede.  The picture on the card he gave me looked like this before the scissors came out:

In fact you can see the fan makes a nice feature of my nose and the birds and flowers make for intricate patterns on my clothing. The artist is Gustav Klimt and his life and work came to be the inspiration for the next assignment. We had to research an artist of our choice and then create a mood board representing where they might live. Finally we had to design a product that they would like or find useful based on our individual findings.

After reading up on their lifestyle was it possible to guess how the home would be? For example, soft v hard, warm v cold, modern v antique, minimalist v cosy. 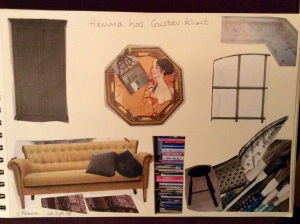 You may notice that the lady’s head is the final piece of the cut up puzzle from the picture I used above. I found the gold frame image in a magazine with a different picture inside but I found the gilded mirror frame and layered it with images of golden leaves to make a new “painting” in the Klimt “golden phase.” The mirror being used by the woman rather than by the artist himself is symbolic of the fact that he was not interested in painting himself, only other people or landscapes around him.

This is his dwellings after his awards and successes and wealth from his well-deserved recognition. He grew up relatively poor and was one of seven children with a musical mother and father who worked as a gold engraver.

I also read that Gustav Klimt was rather a home bod so I have given him some home comforts, including a stack of books (about art, of course!) Apparently, around the house Gustav wore sandals and a robe but no underwear! (The wardrobe in the top left is a useful robe hanging place.) It seems he was very fond of women and didn’t limit his energies to only painting them as it was reported that he had fathered at least 14 children. For this reason I have kindly provided a couch suitable for seduction.

So, to the final part: designing something appropriate for the subject of this assignment. Time was speeding past but I just managed to sketch my ideas out. I thought it would have to be another robe for hanging out (pun intended!) at his apartment. I decided on a mosaic edge and cuff using mosaic knitting technique: 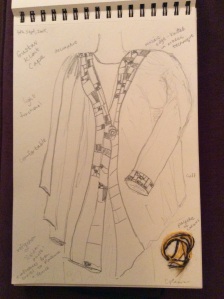 There is more about mosaic knitting here: blog post on mosaic 1 and here: blog post 2. Klimt did not travel much but he made it to Venice and Ravenna and was greatly influenced by the mosaics he saw there.

It was only once I started learning mosaic knitting that I first became aware of Ravenna and the amazing work there. Here is a wonderful example:

I feel really inspired by today’s intensive class. I hope by sharing my work you find some inspiration for your next yarn creation, mosaic or otherwise.

PS. Klimt was also influenced by Japanese art and funnily enough yesterday we had a presentation by Japanese visitors who are part of an education exchange system! More on that later… 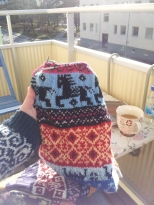 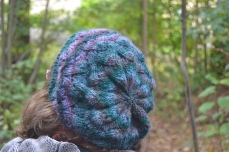